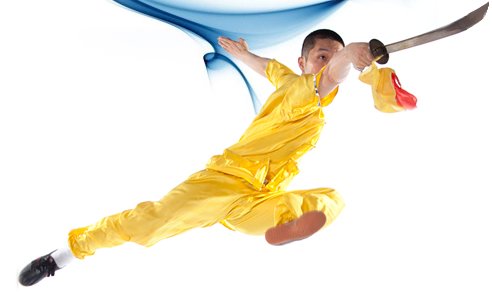 Chen, 30, has been practicing kung fu for 25 years, and teaches the martial art in Argentina. With her impressive performance in the Disney TV show "Super Torpe," she became a well-known kung fu star in Latin America and other parts of the world. Some fans even call her the "female Bruce Lee."

Chen was born in China's eastern Zhejiang province. Like many kung fu stars, she started her career as a professional martial arts athlete.

She was determined to learn kung fu when she was 5 years old, even through her parents wanted her to take up Ping-Pong or swimming, which seemed more suitable for a girl.

With hard work and talent, Chen soon distinguished herself and was recruited by the national team. She won many awards, including a gold medal at the East Asian Games.

In 2007, Chen retired and went to South America to pursue her dream as a promoter of kung fu and Chinese culture. "I just wanted to try and see what I could accomplish with kung fu in a new country," she said.

She saw the 2008 Beijing Olympic Games as an opportunity and opened a kung fu school in Buenos Aires in February 2008. To her disappointment, only one student showed up on the opening of the school.

"We had two coaches but only one student. That was one of the most disappointing days of my life," Chen said.

However, she did not give up. Now the school has more than 900 students. Some of her best graduates have become kung fu instructors and opened branches of the school in other parts of Argentina.

"Kung fu appears fantastic and mysterious in the movies. Some students even brought Bruce Lee's movies to the school and I would have to explain what kung fu really is," Chen said.

However, what made her really famous in the country was her work in the TV show.

After her successful performance in "Super Torpe," Chen became a new kung fu idol in Latin America and received a lot of praise and encouragement from fans.

She believes kung fu is more of a spiritual practice and way of life."The essence of kung fu is in the traditional culture and virtues behind it," she said.

Earlier this year, Chen went back to China on vacation. She saw the fast development and changes of her hometown. But at the same time, some traditions remained intact.

"After these years abroad, I deeply feel that the most important thing for you to earn the respect of others is your cultural foundation," she said.